You can’t spell HD without Larry Thorpe. A constant innovator, he has worked his magic across continents, companies, and industries, leaving an indelible trail of success throughout the broadcast world.

Thorpe earned an early reputation for innovation as the project manager on the world’s first automated color studio camera, then revolutionized imaging with the chargecoupled device (CCD) before turning his attention to the HD technology that he made a worldwide, multi-industry phenomenon. His decades of devotion have changed the way the world watches television.

“Larry is one of the most innovative, high-energy, dedicated people you can imagine,” says Charles Steinberg, retired President of Sony Broadcast and Professional Products. “He is full of energy, full of ideas, constantly thinking of new ways to do things.”

Says Hugo Gaggioni, Chief Technology Officer of Sony’s Broadcast and Production Systems Division, “He’s a consummate engineer. He tries to impart that vision and charisma to everybody that he works with.”

After a run with the BBC, Thorpe began imparting his vision at RCA in the 1960s, where he was the project manager for the TK-47 color camera. Introduced in 1979 as the first automatic color studio camera, the TK-47 used a computer to complete all of the major setup functions, giving back to engineers the hours they once spent tediously tweaking equipment.

“Nothing approached the quality of the TK-47. That camera was probably the best camera of its time.”

With 10 patents already to his name, Thorpe moved in 1982 to Sony, where he persuaded executives to enter the studio-camera business and launched it with the BVP-360. More important to the industry than the camera, however, was the CCD imager inside it. 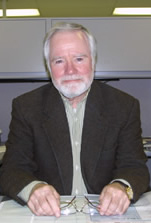 Of all his accomplishments, Thorpe is most acclaimed for being a major proponent of high-definition television, pioneering HDTV market development, and almost singlehandedly bringing the technology to life.

“He’s been the pioneer, the spearhead, the evangelist for hi-def TV,” Steinberg says. “He was selling people on how it would change the whole reaction that people would have to television. Early on, it was difficult, but he can’t do things on a half-baked basis.”

As early as 1983, Thorpe represented Sony before the ATSC and the SMPTE working group on high-definition. He introduced Sony’s first HD camera, the tube-based HDC- 100, not long after and remains infectiously enthusiastic about HD.

Thorpe was particularly proud of his 1992 introduction of the first CCD high-definition camera. “That just bowled everybody over,” he said in 2004. “I never saw such a reaction. We had all sorts of horrors with tubes in HD, but the CCD put all that to bed.”

Thorpe pushed the technology simultaneously toward mainstream production and digital cinema. Working from a technical and a marketing angle, he promoted HD for production applications, traveling the globe to successfully persuade end users to move to the new technology. After a celebrated career with Sony, the accomplished engineer became the consummate lens expert, moving to Canon, where he is now one of the nation’s authorities on optics and lenses.

“He just doesn’t stop learning, pushing himself to know more,” Gaggioni says. “Again, he has taught himself everything that is to be known, and that’s commendable.”